What is the unquoted service path vulnerability in Windows?

When a service in Windows is started, Windows has to try to find it. Usually, this is an easy task because the path is well-defined and contained in quotation marks. Like this example from a commercial VPN service: 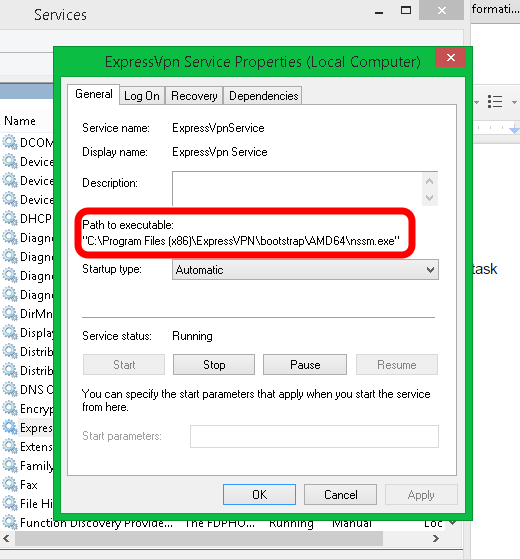 Windows has no question about where to find this executable.

If the path contains spaces and is not surrounded by quotation marks, then Windows has to guess where to find your service.  Like this for example: 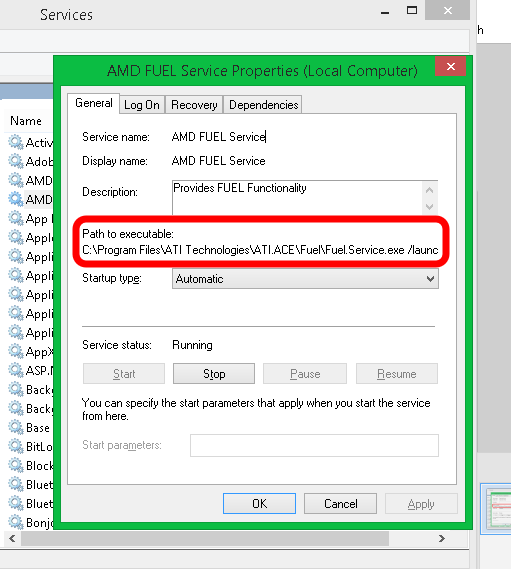 Now Windows has to try to figure out what file the folks at AMD are referring to. Since spaces on the command line could either be a part of the FILE PATH or they could indicate COMMAND-LINE ARGUMENTS.

Here is Windows’ chain of thought:

So who cares if you can use unquoted paths to execute something?

Well, attackers do. If an attacker has a low level account and wants to escalate privileges, he can look for a service that runs with SYSTEM or ADMINISTRATOR rights and use that service to execute a command of his choice.  All he has to do is drop a malicious file named C:\Program.exe and have the file create a new user.

OK Cool. So how do you exploit the vulnerability IRL?

Frequently in engagements, we have to escalate privileges. First thing we need to do is find a service that is vulnerable. Luckily, the evil mastermind HarmJ0y (Twitter: @HarmJ0y) has created some scripts that do exactly that. This command will get you set-up:

Here is an example of what you are looking for: 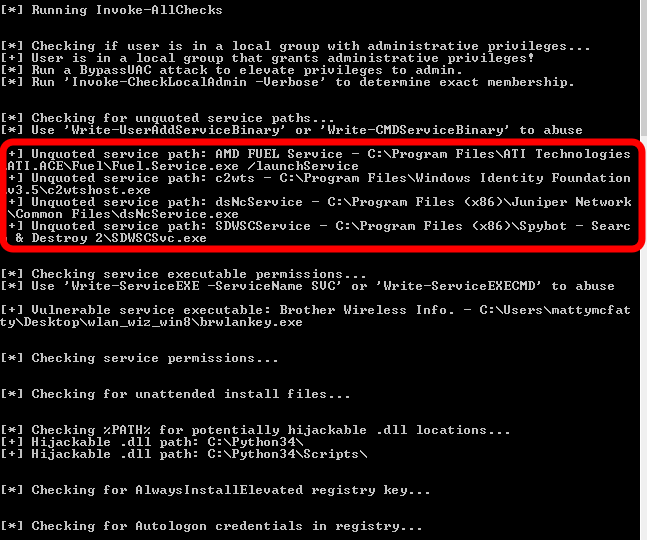 Let’s use Metasploit to create a malicious exe!

We fired up MSFVenom and created an exe payload. Here are some good details on how to do this. Only to find out that this thing needs to be running as a SERVICE and can’t be just a run-of-the-mill EXE. Scratch that.

Let’s use Metasploit to create a malicious service-exe!

Will give us a list of available payload formats. We add a “-f exe-service” and add the file to the target. Only to find out that their Anti-virus knows metasploit and doesn’t like it. Scratch that

Nothing against Veil, but I couldn’t get it to work right on my Kali machine. It looks like it has a ton of cool features. But each time I ran into problems, I read on the forums someone who has the same problem and the answer is always “Wipe Kali and re-install Veil on a clean OS.” That was not an option in this circumstance. So scratch that

Lets use C# to make our own service executable and bypass A/V!

Yes, it has come down to this. After hours of trying to get a malicious executable, we have to build our own. I followed this guide to build a basic service executable in C#. It takes a while but I eventually get one that works. The payload I added to the basic service is underlined below:

* may not be pretty code, but I’ve been working on this waaay to long at this point to care :-)
**you can find the full project on github here: https://github.com/mattymcfatty/unquotedPoC

I build the EXE. I upload it to the target. I rename it to C:\Program.exe. I restart the vulnerable service and…

The event logs show that the exploit RAN!!!

Let’s see if we have a new “mattymcfatty” user

Turns out, I learned two things from this endeavor:

Both are good tricks to keep in your arsenal.  Hit me up with comments/questions. Happy Hacking!

For more information, check out the privilege escalation portion of the book The Hacker Playbook 2: Practical Guide To Penetration Testing. It helped me immensely in getting this exploit working.

Any cookies that may not be particularly necessary for the website to function and is used specifically to collect user personal data via analytics, ads, other embedded contents are termed as non-necessary cookies. It is mandatory to procure user consent prior to running these cookies on your website.