As JavaScript continues its quest for world domination, JSON Web Tokens (JWTs) are becoming more and more prevalent in application security.  Many applications use them, so it has become very important for me to know as much as I can and I want to share what I’ve learned. In this blog post I will discuss what JWTs are and common vulnerabilities that come along with them.

But first, I want to address a misconception. JWTs come in two varieties: JSON Web Signature (JWS) and JSON Web Encryption (JWE). JWSs are signed JSON data that are comprised of three parts, while JWEs are encrypted JSON data and made up of five parts:

Originally, I was only aware of and had only seen JWSs (not that I knew it was called that). I referred to them as JWTs. I wasn’t completely in the wrong, because all JWSs are JWTs, however, not all JWTs are JWSs. As I have yet to work with a JWE, this blog post will only cover JWTs that are JWSs. Currently, the JWT RFC only requires support for JWS to be compliant. JWE is optional functionality, as seen in the table below. Maybe that is the reason for the misconception? No matter, now back to your scheduled programming.

There is already loads of good information about the JWS version of JWTs (hence forth just called JWT) floating around, especially on jwt.io, so I’ll just cover the basics quickly. A JWT is just signed JSON data, typically for use in authentication and information exchange. The signature aims to maintain the JSON data’s integrity. JWTs are comprised of three base64 encoded parts, separated by a “.” period. The three parts are: header, payload (sometimes referred to as claims), and signature. The header typically only contains the algorithm used to sign the JSON data. The algorithms can work in variety of ways, such as a HMAC (symmetric) or RSA certificate schemas (asymmetric). The payload contains the plaintext JSON data to be signed. Finally, the signature contains the signing result of the payload and the algorithm specified in the header.

So let’s take a look at a quick JWT example signed with HS256 using “secret” as its key:

If we decode the base64 and spilt where the “.”s are, we get the following:

The following are the different algorithms for use with JWTs:

“HS256” is the most common algorithm and is the only required algorithm that provides integrity (“none” will be discussed shortly). That’s the quick and dirty basics of JWTs.

Here’s a list of things I look for when I come across JWTs.

If the “HS256” algorithm is used, that means the payload is signed with an HMAC using SHA-256 with a symmetric key. Assuming we have a valid JWT, we have both a payload and a valid signature for that payload. This means we can brute force various symmetric keys and compare the signature result to the known-valid signature. If we have a match, then we have discovered the symmetric key and can modify and forge JWTs at will. There are several projects that can do this:

As mentioned above, the JWT itself defines what algorithm was used to sign it. One such algorithm in the JWT specification is the “none” algorithm, which effectively tells a JWT implementation that there is no signature and the provided data is valid. The idea behind the “none” algorithm was for situations where the integrity of the token has already been verified. However, it was discovered that some JWT instances accepted payloads signed (not really) with the “none” algorithm in situations where the payload was not yet trusted, therefore trusting untrusted data. This vulnerability was quickly patched in JWT implementations once discovered by Tim McLean in 2015. However, poor coding or patching practices could still lead to the vulnerability.

To check this during testing, we simply update the header of a JWT to be reflect  “alg”: “none” and then supply an empty signature. If vulnerable, the data will be accepted and we are free to modify and forge the payload data as we please. I do this using the “json-web-tokens” extension in Burp Suite using “Repeater”, as seen in the following screenshot:

There is another great Burp Suite extension for testing this on the fly called “json-web-token-attacker“. However, it does not work with Logger++ so I do not use it often.

Another issue discovered by Tim McLean in 2015 was a vulnerability surrounding RSA algorithm implementation of JWTs. In an RSA algorithm implementation of JWTs, private keys are typically used by the server to sign the payload, and clients can verify the JWT using the public key. Like the client, the server will use the public key to confirm the JWTs integrity upon receiving it from a client. Here is where the vulnerability can occur. If a server’s code is expecting a token with “alg” set to RSA, but receives a token with “alg” is set to HMAC, it may inadvertently use the public key as the HMAC symmetric key when verifying the signature. This is bad because the depending on the implementation, the public key may be known to the world. Therefore, we could modify payloads, sign using public key, set “alg” to HMAC, and then be able to forge JWTs. Like the previously mentioned vulnerability, this was quickly patched in most JWT implementations, but may still exist in others due to poor coding or patching practices.

To check for this, we can use the above mentioned “json-web-token-attacker” extension for Burp Suite. It has a module for testing this as seen in the following screenshot. 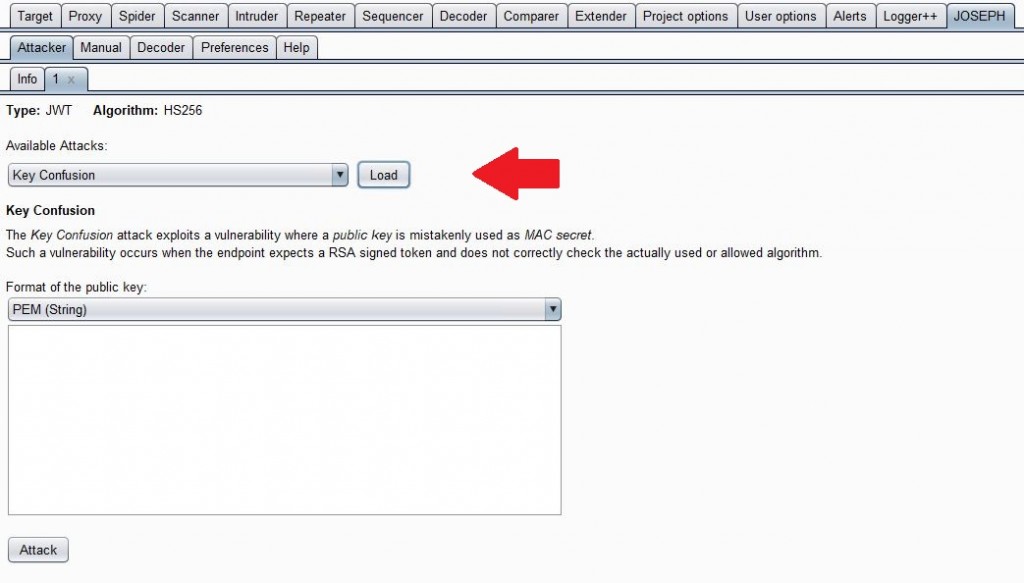 Like mentioned before, it does not work with Logger++, which can make it a pain to work with. Finding the public key can be the difficult part and is totally dependent on how the JWT schema is configured. Some applications use the same RSA key pair as their TLS web server. In that scenario, we can use “openssl” to retrieve the public key:

In other scenarios, the public key could be hard coded into a mobile application or web application, or potentially not available at all.  When testing this, ask yourself who might need the public key and then try and find it.

This last category is sort of the catch-all. These sorts of vulnerabilities are those not against JWTs themselves, rather a flaw in how a particular application uses them. 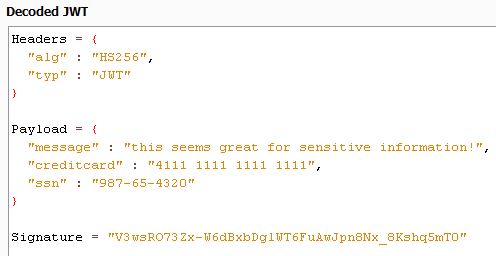 As we all know, base64 is not encryption and should be considered as plaintext. That being said, it’s entirely possible for sensitive data to be contained in a JWT’s payload and go unnoticed because of the encoding.  While finding golden treasure here is unlikely (but maybe some application keeps SSN or credit card #s here?), it may be likely to find some useful information here. For example, JWTs can often be used to track a user’s permissions, back-end identification #, or other attributes. Having these extra details can come in very handy during assessments and may help uncover other puzzle pieces that you never knew were related.

“/auth” would redirect to “app.server.com” after authentication.

This vulnerability is specific to the particular SSO JWT implementation. However, it goes to show that understand the SSO flow and testing along the way can lead to interesting scenarios.

Thanks for reading and I hope you learned a thing or two about JWT.

About the Author: Tyler Rosonke